Excess all areas: inside the home of Rockett St George’s founder

Every room in Lucy St George’s north London home is a different size and shape. This suits the designer perfectly, because she’s “always been a fan of the one-off and the quirky”. St George’s love of the offbeat is the reason she co-founded Rockett St George with business partner Jane Rockett, in 2007. Since then the homewares brand has acquired a reputation for witty pieces – flamingo-legged lamps, hand-shaped chairs – inspired by their vintage finds. “We’ve always sold things we like: eccentric designs with personality.”

The home she shares with her two daughters feels out of the ordinary, too. Outside, it’s a standard Edwardian terraced house: brick-fronted and bay-windowed, with stained-glass panels glowing in the wide front door. Inside, the look is Studio 54 with a bit of fin de siècle excess. Surfaces gleam with gold and silver. Classical sculptures lurk among the waxy houseplants. A disco ball scatters sunbeams across the ceiling – like a blingy Jackson Pollock – in the afternoon: “We call it disco o’clock.”

Before she moved in, St George says, she had stood at the bus stop outside for years, commuting to work. “One day I noticed a for sale sign so I thought I’d have a look. It felt right. I believe in fate when it comes to homes.” Exuberant is a polite way of describing its previous incarnation, as the last owner also had her own distinct style. A commotion of print and pattern filled the two-storey interior: “There were four different wall coverings, all beautiful but OTT. As we arrived to look around, people were flocking out, in shock. Some people didn’t even make it upstairs.”

Squeezed into an end-of-terrace plot, the wedge-shaped house presented a challenge. “Because it’s an awkward configuration it was a case of working out the best way to use each room.” She began by knocking through three small rooms to create the eat-in kitchen. The plaster was stripped back to reveal the patina and texture of the London brick, glowing black tiles came from Marrakech, and the ceiling was lined in tin tiles. “Although it’s northeast facing, the shiny surfaces bounce the light around so it never feels dark,” St George says. Instead of culinary paraphernalia, framed artworks are propped across Ikea worktops. “I wanted the kitchen to feel sociable, not conventionally kitcheny.”

St George, an impulsive, enthusiastic DIYer, did most of the decorating with her mother, a former antiques dealer: “She’s meticulous, I’m a bit gung-ho, so we make a good team.” St George painted the sitting room cocoa-brown in homage to her 70s childhood – “I didn’t like it then, but now it’s taken on a nostalgic appeal” – but the old, striped wallpaper underneath still shows through. “My mother would have steamed it off first,” she says, adding she was keen to just get it done. “If I could I’d paint round the pictures and just do the bits you see.” Overhead, the gold cornice is a legacy of the previous owner. “I might not have had the courage to do it myself. But because I inherited it, I love it.”

St George approaches decorating like dressing. “If I wear a block colour I’ll mix it with different textures: studded shoes, a sequinned jacket. It’s what I’ve done here.” Upstairs, in a bedroom, black walls contrast with floral curtains. Tatty carpets were uprooted and the original floorboards stencilled using wall paints to make a feature of the unrestored floor. In the bathroom, bold, feather-print wallpaper is set against original panelling. Another bedroom basks in deep rose pink, inspired by a Moroccan roof terrace. Nearby, daughter Grace, 21, is painting her bedroom green. “I’m allowed to express myself in the rest of the house so why shouldn’t she?”

She remembers being dragged to car-boot sales as a child. “Now I do the same with my girls. My rule is one in, one out, but because I’m a maximalist I can’t resist adding new things.” A prancing fairground horse, complete with flashing lights, was a gift. “I saw it with my mother and said, ‘That’s the craziest thing ever.’ She bought it for me secretly.” A sprawling leather sofa began life as the back seat of a coach. 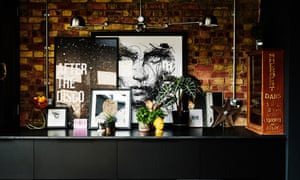