Nicole Kidman is private about the children she adopted with ex Tom Cruise.

But the actress gave Vanity Fair readers some rare insight into her older kids lives during an interview for the magazine’s latest issue.

Both offspring were adopted during her time with Tom Cruise, who Kidman was married to from 1990 to 2001.

Speaking about the outspoken Scientologist’s link to the UK, she said: ‘You know, she really feels more English. We lived there for Eyes Wide Shut, Mission Impossible, and The Portrait of a Lady. They both had English accents when they were little.’

24-year-old son Connor is a musician who lives in Miami.

In addition to her older children, Kidman has  two young daughters with husband Keith Urban.

Speaking about her desire to keep her kids’ lives ‘private back in November 2018, Nicole explained: ‘I have to protect those relationships. I know 150 percent that I would give up my life for my children because it’s what my purpose is. They are adults. They are able to make their own decisions. They have made choices to be Scientologists and, as a mother, it’s my job to love them.’ 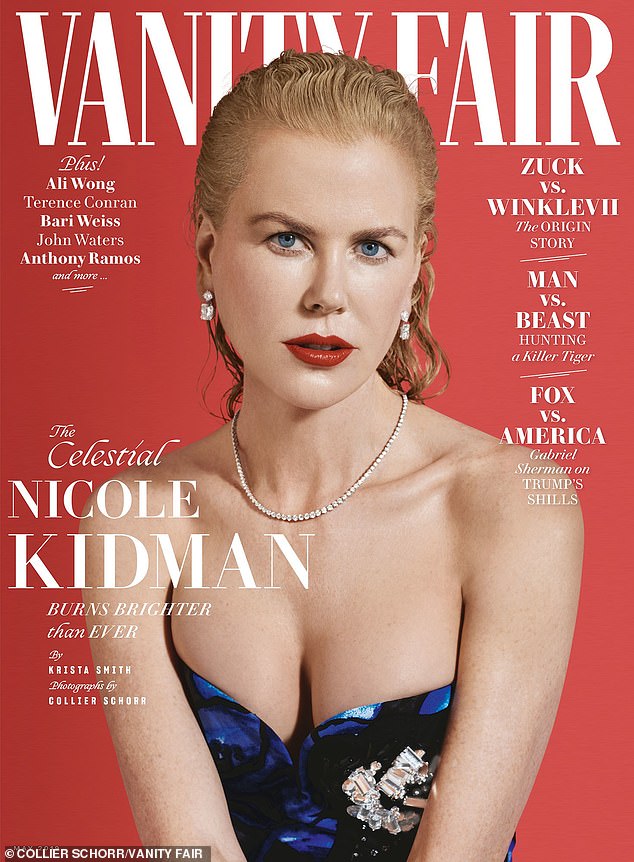 The star channeled old Hollywood glamour on the cover of the new May issue.

With just weeks to go until the premiere of the second season of Big Little Lies the 51-year-old actress dished on the hit HBO series, her marriage and motherhood.

Married to country star Keith Urban for 13 years, the Hawaii-born beauty says when she’s not following him on tour or jetting off to various movie sets, they enjoy a quiet family life in Nashville.

Kidman says it’s important for them to keep strong boundaries for their two young daughters Faith, eight, and Sunday, 10, which she admits may make her ‘unpopular’.

‘They don’t have a phone and I don’t allow them to have an Instagram. I try to keep some sort of boundaries.’ she reveals.

Kidman reveals her eldest daughter Sunday is already showing an interest in following her footsteps into acting but she doesn’t plan on pressuring her kids to go in that direction. 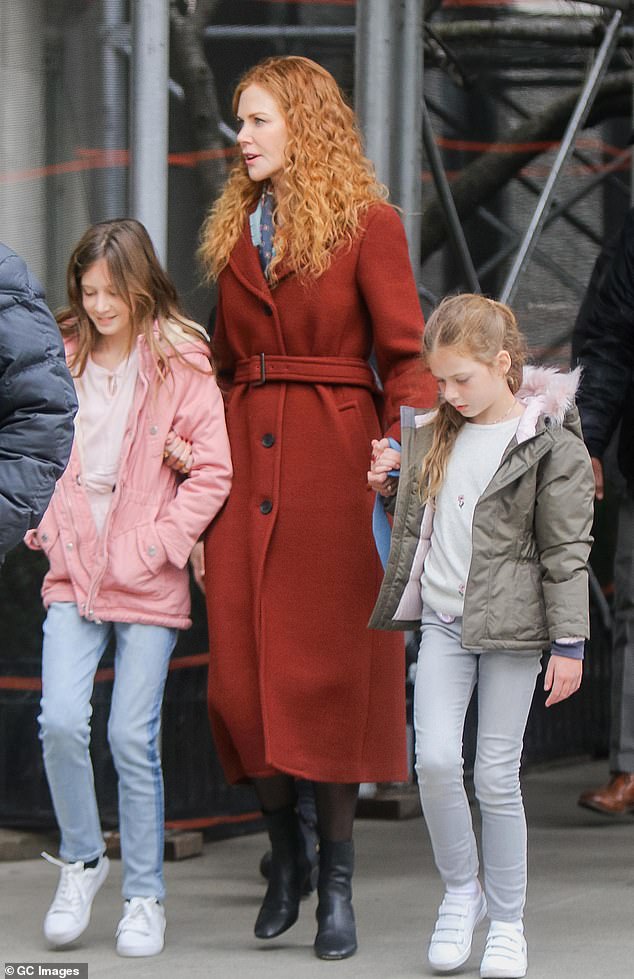 ‘They don’t have a phone and I don’t allow them to have an Instagram. I try to keep some sort of boundaries.’ Kidman told Vanity Fair 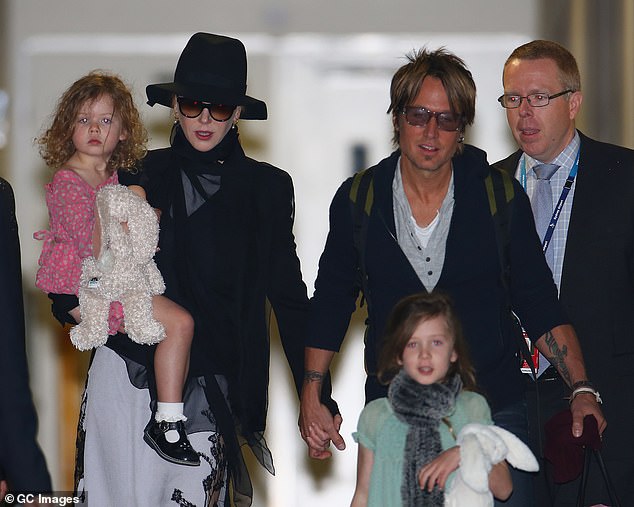 ‘You can’t really get kids into anything, I’ve realized. You can push them a bit, but motivation is a really hard thing. I mean, nobody motivated me to be an actor; if anything they tried to deter me.’

‘They both had English accents when they were little.’ she adds.

The highly-anticipated second season of her mini series Big Little Lies, which she stars in with Reese Witherspoon, Laura Dern, Zoe Kravitz and Shailene Woodley, airs on HBO next month and Kidman says the unique filming experience is one she will always cherish.

‘To watch Zoë and Shailene grow up and to see them become women … it’s so nice, and I’ve never had that. I know Laura and Reese feel that, too. We’re all so different, yet we complement each other.’

Witherspoon says: ‘Nicole and I talk about this often. I’d been in a show with maybe one other woman, but never five female leads,

‘I never even had that many conversations on-screen with women who had the same size part as me. It’s pretty amazing to get to work with this group. I feel like it’s a singular experience I’ll never have again.’ 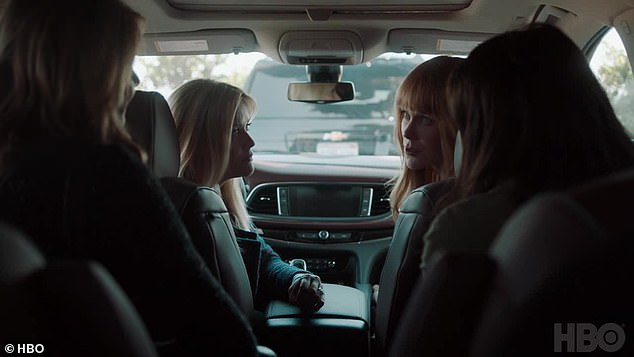 ‘We’re all so different, yet we complement each other.’ Kidman says of the Big Little Lies cast 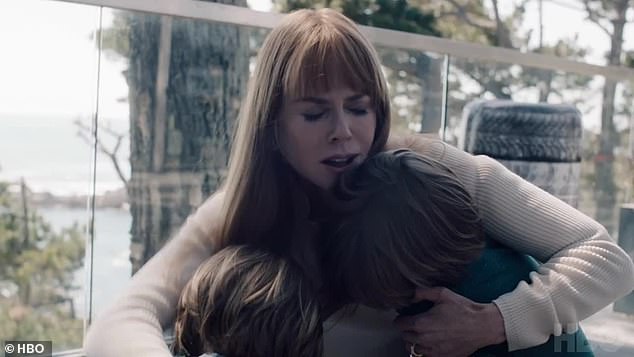 Kidman adds, ‘Look at the Friends cast, they spent all that time together—they’re different because there are no men in our equation. I mean, there are, but they’re not on the group chat, let’s put it that way.’

And adding Meryl Streep to the cast this time round was a delight as Kidman says ‘Can you imagine that we got to go to dinner with Meryl every week? And hear her stories!?

‘It’s like years and years of actresses being siloed off, and finally they let us intermingle. You can only imagine the conversations that we had. It was a really amazing experience of sharing our indignities and our triumphs, and just every rainbow of the female experience in our business.’

The May issue of Vanity Fair hits newsstands May 7. 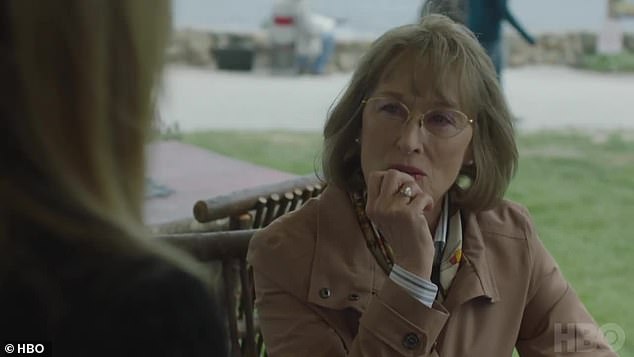 Meryl Streep joins the cast this time round with Kidman gushing ‘Can you imagine that we got to go to dinner with Meryl every week? And hear her stories!?’