Tens of Thousands Join ‘Biggest Rally Yet’ Against Serbia’s Vucic

The latest protest against the rule of Serbian President Vucic drew tens of thousands of people from all over Serbia on Saturday evening to continue their calls for the government’s resignation.

Tens of thousands of Serbian citizens marched against the government of President Aleksandar Vucic on Saturday, during what the opposition aimed to be the largest in a series of anti-government rallies that have been held weekly for five months.

The people gathered in front of the Serbian parliament, from where they walked to the government building and back via Slavija square to the Assembly.

During the march, opposition leaders took to the front of the rally for the first time instead of protest organisers, leading the mass of protesters through the capital. They marched carrying a banner with the slogan “All as one”.

According to the Interior Ministry, an estimated 7,500 people turned out for the protest, but the event’s organisers claim the number was much higher.

On returning to the parliament building, where a large stage had been set up, leader of the far-right Dveri movement Bosko Obradovic told the crowd that they will “not give up until Serbia is free again”.

“We are asking for free media and free elections. [There’s] no turning back until we win!” Obradovic said.

The president of the opposition People’s Party, Vuk Jeremic, also addressed the crowd, telling them that the “day of victory is close”. During his speech, some protesters lit flares in front of the Assembly. 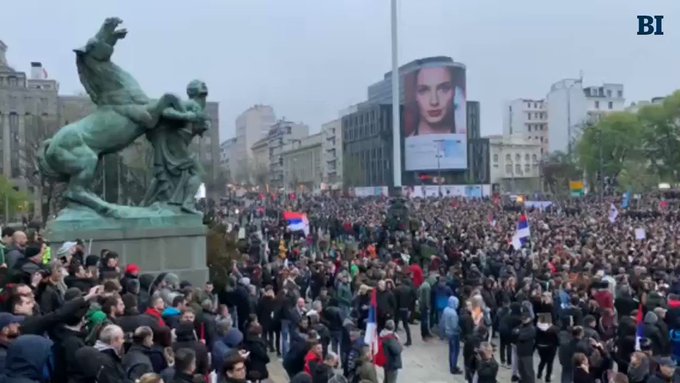 Many participants had also come from across Serbia to join the demonstration, which organisers had predicted would be the biggest anti-government rally so far.

A group of people had even travelled from the mainly ethnic Serbian town of Gracanica in central Kosovo to take part.

The protesters reiterated their calls on the government to resign, but also added new demands to their list, which now included the formation of a joint commission made up of government and opposition representatives to create conditions for fair elections, replacing the board of the Electronic Media Regulating Agency, REM, and changing the management of the public broadcaster, RTS.

Ahead of today’s protest, Serbian President Vucic said that he did not expect large numbers of citizens to show up.

“They [the opposition] will accomplish nothing except making noise and shouting,” Vucic told Serbian media.

His conservative party members, meanwhile, barricaded themselves inside the Belgrade parliament and local city councils throughout Serbia on Saturday, claiming they wanted to prevent the forceful takeover of power by “fascists and thugs.”

The “One of 5 Million” protests have been held in Belgrade every Saturday since December 8, spreading to many other cities and town across the country since they.

Their main demands have remained for Serbian President Vucic and his governing Progressives to resign, as well as more media freedom and fair elections.